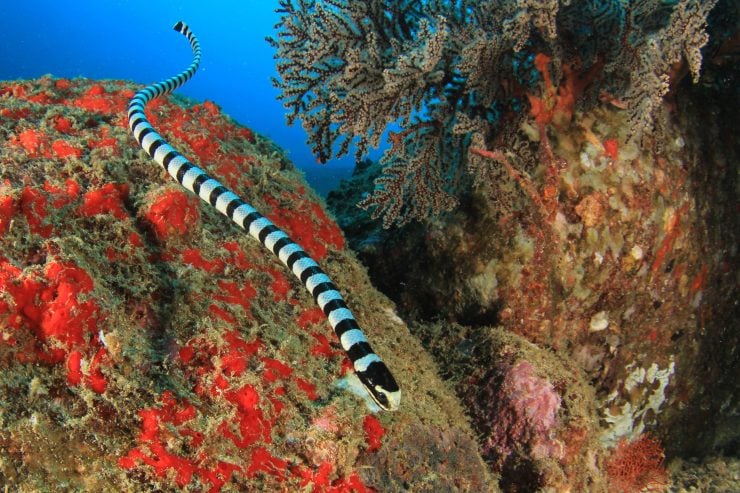 Over sixty species of sea snakes populate the world, the majority of them residing in coastal areas of the Pacific and Indian Oceans. Sea snakes primarily live in waters one hundred feet deep or less. So what do sea snakes eat? Let’s learn more about that.

Sea snakes eat fish, eels, and crustaceans. Some sea snakes eat only fish eggs and others are capable of eating young octopi. They find their food by diving and hunting through coral reefs, mangroves, and the ocean floor. 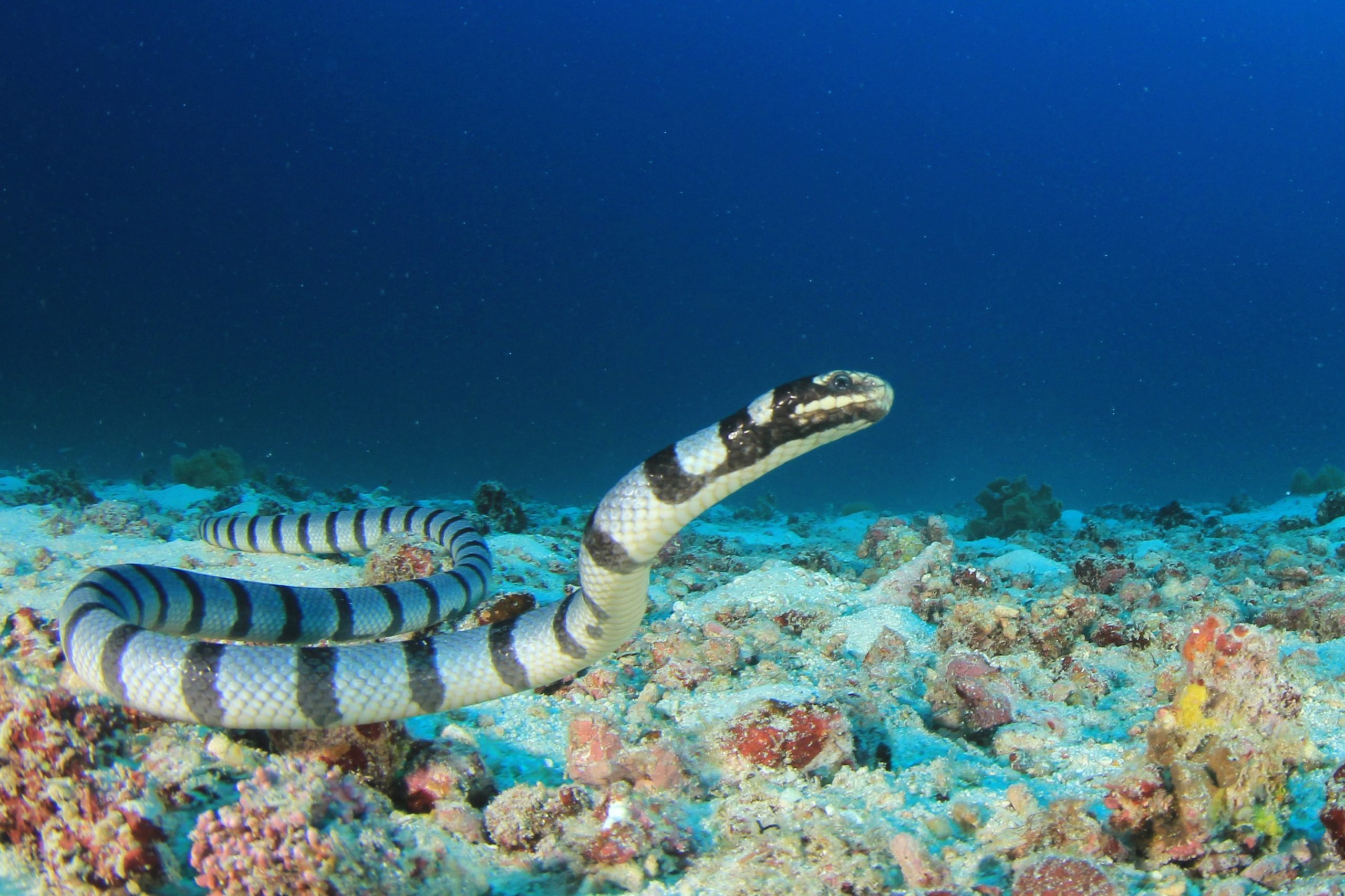 Based on findings in a 1983 report, a sea snake’s specific diet ranges across the following prey, some indicated only by body shape: eels, mullet-like, puffer-like, eel-like, rabbitfish-like, spinous, awl-like, surgeonfish-like, fish eggs, invertebrates, goby-like, and flatfish. These conclusions were reached by examining the bellies of deceased sea snakes.

Based on the same 1983 report mentioned above, the volume of specific food sources found in sea snake bellies was recorded and this is what they learned: sea snakes inarguably prefer eels to all other food sources. Second to eels, sea snakes prefer goby-like fish, a type of fish with multiple fins, but its body is round and easy to swallow. 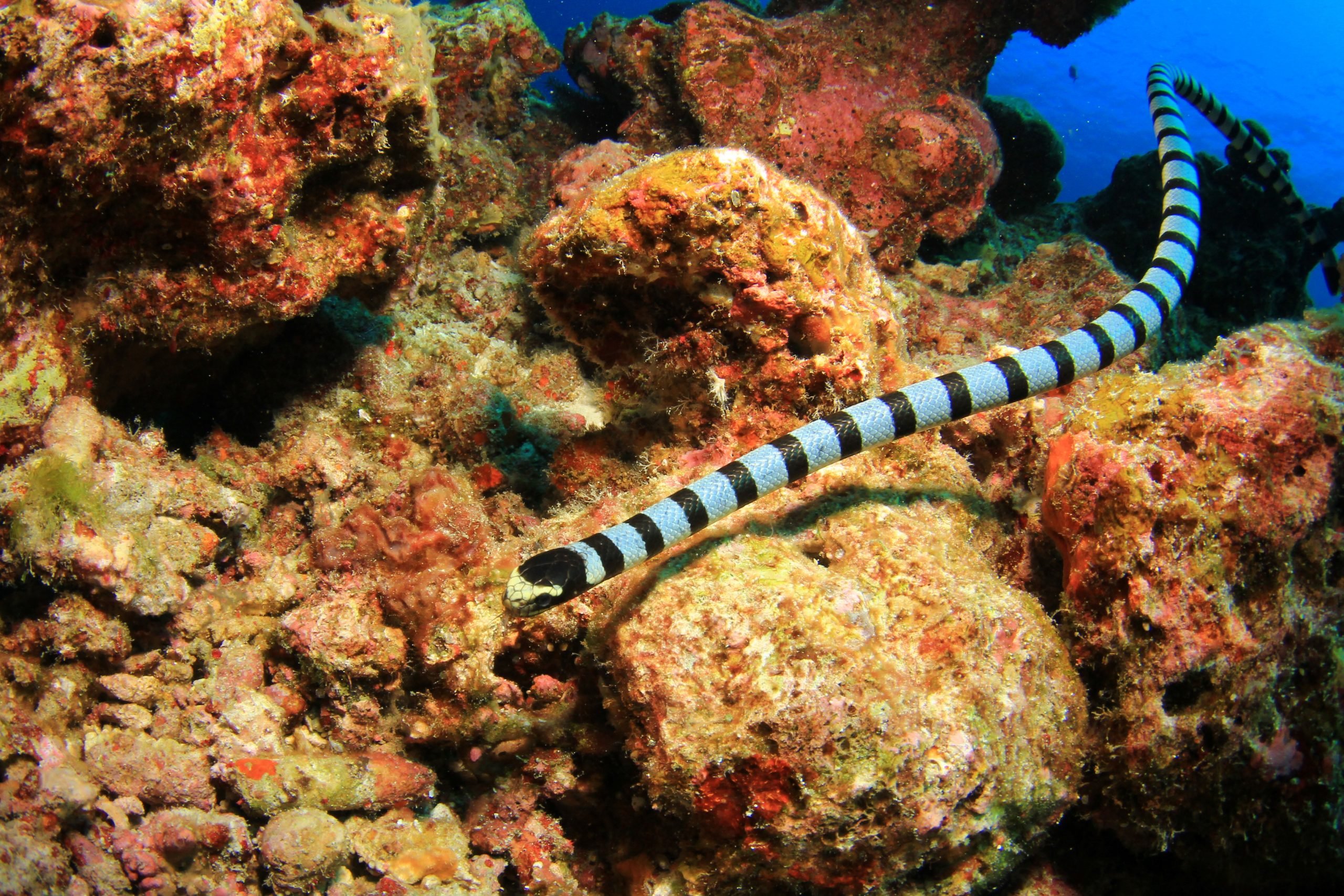 A Few Facts About The Sea Snake

Sea snakes flourish in saltwater and their closest land relative is the cobra. Their lungs practically stretch the entire length of their bodies meaning they must swim to the surface to breath air. Researchers speculate that sea snakes possess the ability to absorb oxygen through their skin.

Sea snakes are also ovoviviparous, which means their offspring are born fully formed, unlike their land counterparts who lay eggs. Sea snakes still produce eggs, but these eggs and the offspring inside develop within their mother’s body until hatched.

Sea snakes are highly venomous, but their fangs are so short that their venom output is small. In fact, sea snakes are themselves typically safe from being eaten due to how venomous they are. They’d poison whatever tried to digest them.

The average sea snake is somewhere between three and a half to five feet long. Some sea snakes, however, have measured up to nearly nine feet long. With that in mind, what kind of diet do sea snakes have?

Now we hope we’ve answered the question, “What do sea snakes eat?” As you can tell, a sea snake’s diet spans eels, multiple families of fish, and the occasional fish egg and crustacean.

You can rest easy knowing you’re not sea snake fodder, but you probably shouldn’t swim out into open water and try to test that. Sea snakes may not find you tasty, but some might still take a nip. And despite what sea snakes eat, you, of course, should never eat one due to its toxicity.