The giant clam (Tridacna gigas) is the largest known living mollusk on earth. Their mass can reach more than 550 pounds (250 kg). Once a giant clam secures itself to a reef, it will remain there for the rest of its life. Their mantles (the outer wall of a mollusk’s body) glisten due to the iridophores, or cells that reflect light, protecting the clam’s flesh from UV rays.

We rarely find this behemoth animal among coral reefs anymore due to decades of over-harvesting. Thankfully, giant clam aquaculture is successfully replacing wild harvesting, while giant clams in the wild are under strict protection by the Endangered Species Act. 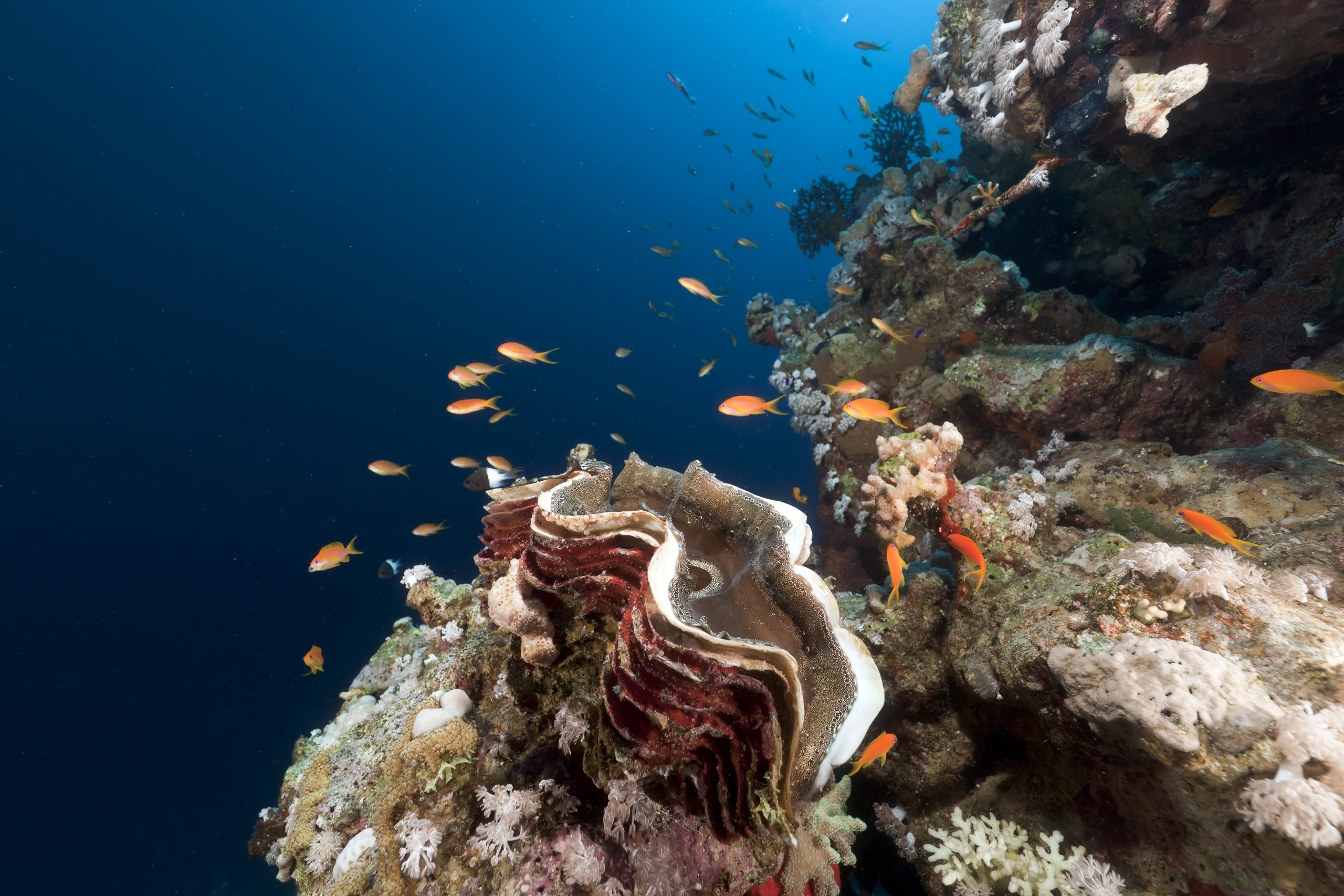 Diet of the Giant Clam

Giant clams grow to their enormous size by eating the sugars and proteins created by the billions of symbiotic algae that live inside their tissues. A clam’s multicolored shell is wildly colorful thanks to the many algae forms (also called zooxanthellae) that grow within its body.

Thanks to their intimate relationship with plant-like algae, giant clams can live up to 100 years and beyond.

The giant clam provides a safe home and regular exposure to sunlight for the algae. The algae grow via photosynthesis (using sunlight to convert carbon dioxide into food or energy) during the day when the giant clam’s fluted shell opens and exposes its vibrantly colored mantles.

The omnivorous giant clam uses its siphons (pipes) to expel bodily fluids and draw water to filter and eat plankton and other small prey that swim nearby. Nutrients then flow through the mollusk’s body to provide all the necessary nutrients for the algae to survive.

Like coral, algae is the food of choice for giant clams. Thanks to algae’s metabolic products, giant clams can grow to one meter in length even in coral-reef waters low in nutrients. A giant clam’s circulatory system enables algae to thrive at a higher number than without their symbiotic relationship. In return, the phytoplankton (algae) provide a source of omega-3 fatty acids, which are essential to nearly all marine animals’ diets.

Small clams gather 65% of the total carbon required for respiration and growth through filter feeding. Larger clams, such as the giant clam, can only source 34% of the carbon necessary for survival from filter-feeding. 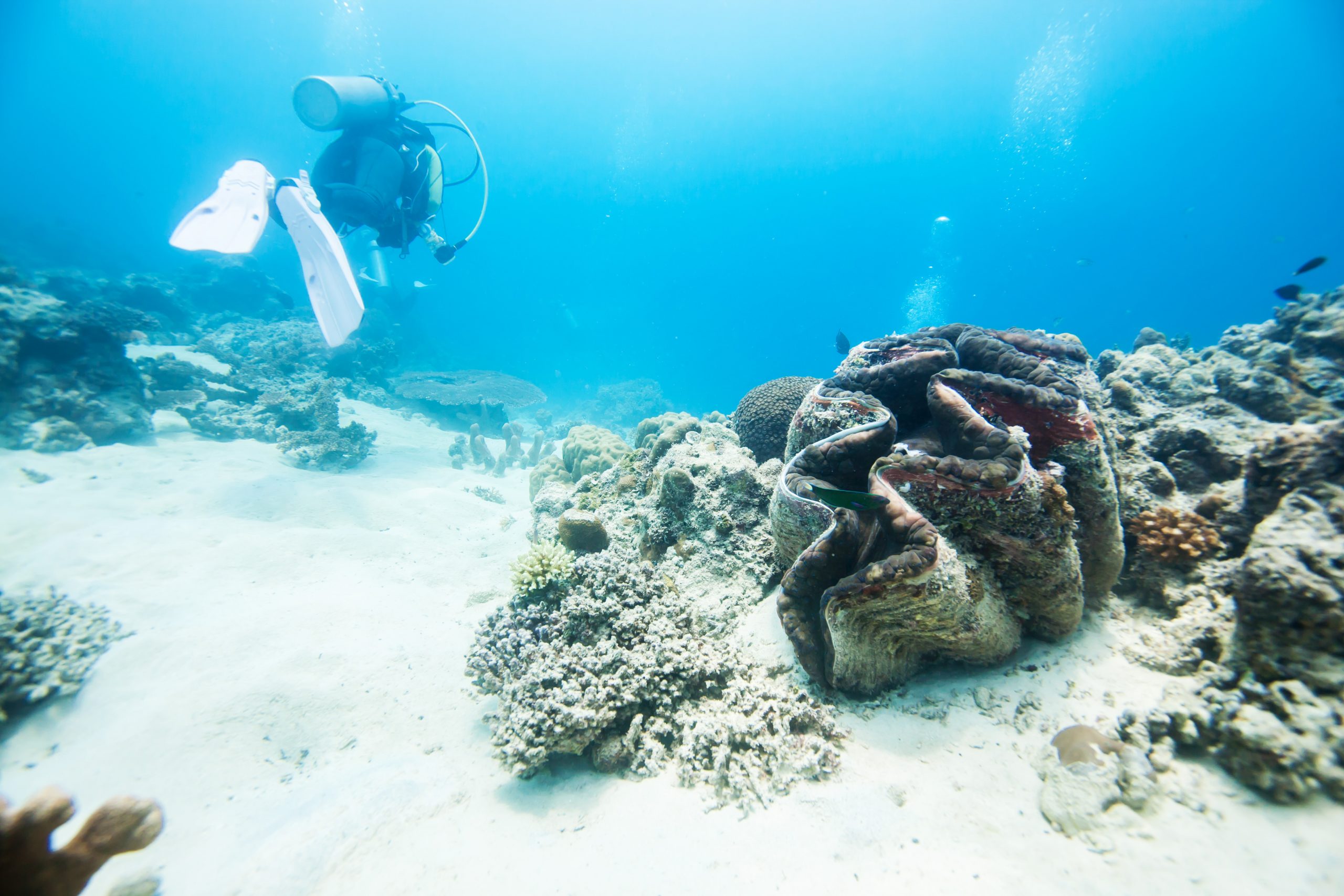 Habitat of the Giant Clam

Giant clams live on shallow reefs in the Indian Ocean, the South Pacific, and South Africa. Below depths of about 66 feet (20 m), the sunlight is too weak to support the algae these mollusks depend on to survive.

Giant clams are admittedly intimidating to look at, so it’s no surprise that legends originating in the South Pacific tell of giant clams that swallow swimmers whole. Thankfully, there is no real account of a human being consumed or killed by a giant clam.

Scientists explain that the giant clam’s adductor muscles, which the animal uses to close its shell, move too slowly to capture a swimmer by surprise. Even the largest of clams would retreat into the safety of its shell instead of tasting human prey.

The fantastic giant clam diets on plankton and algae, and it’s a delicate balance of nature that allows clams and algae to live in harmony.