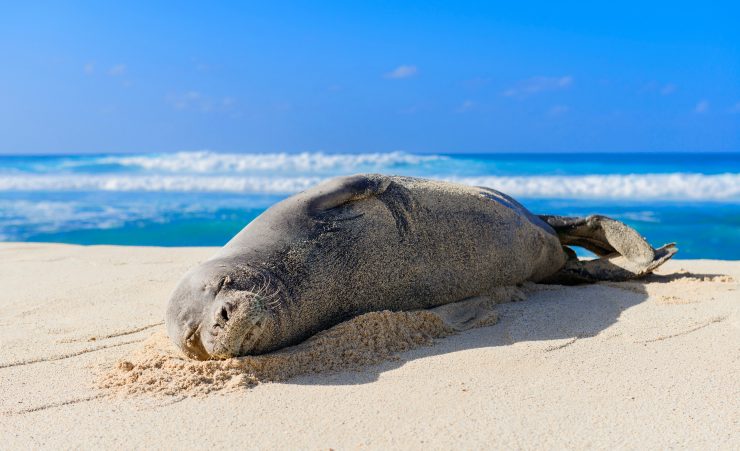 Hawaiian Monk Seals are a critically endangered species of seal that reside on the Hawaiian islands. The seals are a rare but happy site for tourists of the region, though volunteers make sure to prevent said tourists from disturbing them in an attempt to provide a form of protection for the remaining population.

So what has made the Hawaiian Monk Seal population decrease, and what can be done to prevent further harm?

The Hawaiian Monk Seal is one of two mammals native to Hawaii, making them a very special (and interesting!) species. These seals only live on the islands of Hawaii, though they do have a preference as to which ones! A majority of them live on the Northwestern Hawaiian Islands, while a few find the main Hawaiian Islands to be more favorable.

However, only about ⅓ of their time is spent on land: Hawaiian Monk Seals prefer warm waters and coral reefs to the beaches that people hope to find seals on, making them a rare sight to the human species. They tend to only come ashore for extended periods of time to give birth to and raise their pups, though they choose beaches that are protected from both the elements and other creatures (including curious humans).

There are only about 1,100 Hawaiian monk seals left in Hawaii, and the population is currently declining at a rate of 4% per year. Because of this, conservation efforts have been made to save this seal from its seeming inevitable extinction.

Why are Hawaiian Monk Seals Endangered?

There are a number of reasons that are contributing to the demise of the Hawaiian Monk Seal population. Nature and humans have been relatively unkind to the Monk Seal (albeit unintentionally) over the last few centuries.

Hawaiian Monk Seals have the ability to live up to 30 years of age, though this life-expectancy goal is rarely achieved. Many factors contribute to the demise of this special seal population.

Hawaiian Monk Seals struggle to survive in their own habitat for a number of reasons. A lack of food proves dangerous to growing seals, despite them being generalist feeders (in non-scientific terms, this basically means that the seals are not picky eaters). Even so, they do need to compete with other sea creatures for this food, and they risk becoming food themselves in the process: sharks tend to find Hawaiian monk seals to be a very hearty meal, and predation is a huge factor in the decline of the seal population.

Hawaiian Monk Seals also struggle to fight off new diseases that have recently appeared in Hawaii. Other than disease, injuries from fights and attacks (specifically regarding male seals) play a significant part in decreasing the overall population. Male seals not only fight each other but also harm and kill pups, endangering the future of their own species.

As for habitat itself, as sea levels rise, beaches begin to erode away. This limits the number of shallow, protected beaches that the Hawaiian Monk Seals like to give birth on, endangering both mothers and pups. Read more about how rising sea levels are affecting our planet here.

Although natural habits and habitats are no doubt affecting the demise of the Hawaiian Monk Seal, humans are also to blame.

The effects that fishing practices have had on the seal population are drastic, as they have not only reduced a source of food for the seals but have also resulted in entanglements.

Humans disturbing Hawaiian monk seal mothers and pups on beaches has sparked both aggression and fear in many mother seals, causing unnecessary stress.

Although most humans do not intentionally mean to cause stress or harm upon seals, some do. Dead Hawaiian Monk Seals have been found with intentional human-inflicted injuries, such as gunshot wounds.

Hawaiian Monk Seals are a very special species that deserves to be saved from endangerment. Many conservation efforts have been acting to vaccinate seals, prevent human interaction, and ensure pups are being raised on safe beaches. While more can certainly be done to help, these are excellent first steps to take in the journey to preserve the Hawaiian Monk Seal in the future.

The Hawaiian Monk Seal is a critically endangered species for both natural and human-inflicted reasons. While conservation efforts are currently being implemented, the need for public recognition of their impending demise is crucial to saving the species.