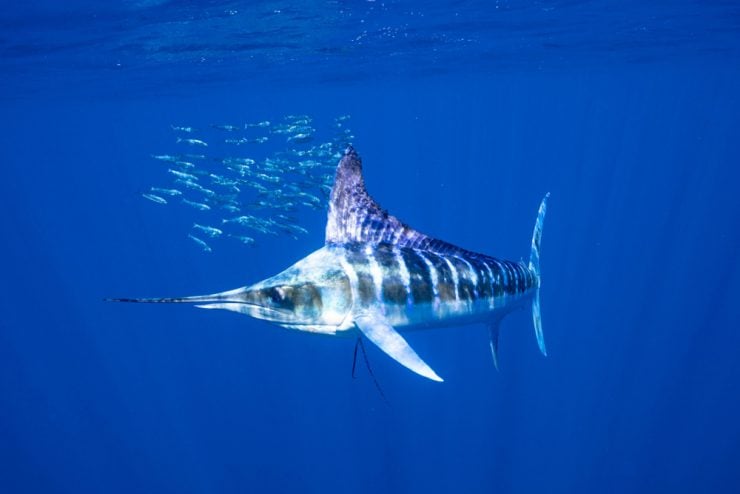 Can You Eat Marlin and How Does It Taste?

Marlins are fish species belonging to the billfish family and are large predator fish known for their speed and fierceness.

There are four types of marlin, namely, blue, black, white, and striped marlin. The blue marlin is the largest, while the white is the smallest. If you catch one, you might wonder, can you eat marlin?

Marlin fish are game fish mainly fished for sport and are vulnerable to extinction. People also fish marlins for consumption due to their distinct flavor.

They are costly because they are among the most challenging fish to catch and are associated with elegance and class.

Do People Eat Marlin and Is It Safe?

When you mention marlin fish, most people think of sport fish and not a delicacy. However, marlin fish is a typical dish in places like Japan, Mexico, and Hawaii.

Marlin is a healthy meal and an excellent alternative to tuna and swordfish. It is low in saturated fat and rich in vitamin B6, vitamin B12, calcium, protein, selenium, and other vital nutrients.

However, it is high in mercury and other toxins. The high mercury level is because of its large size and predatorily behavior. Even worse, the longer the fish spend in the water, the higher the mercury level.

Marlin flesh has a gamey taste but will vary depending on species, seasoning, and preparation method. Because of its aesthetically appealing look and high price, people expect it to have an exotic taste.

However, it has a mild flavor and an almost steak-like texture. It is similar to swordfish but with a milder flavor and a bit stronger than tuna.

Can You Eat Marlin Raw?

Yes, some people eat marlin raw, especially in Japanese cuisines such as sushi and sashimi. However, diligent preparation is required as raw flesh can cause foodborne diseases.

If you want to consume raw marlin, purchase it from a reputable dealer or restaurant.

How To Cook Marlin?

Marlin can be cooked or eaten raw. However, cooking is the best way to ensure you kill all bacteria in the flesh. Cooking also allows you to enhance its taste.

Before cooking, you should brine marlin to season it and prevent the protein from drying. Brining is essential, especially if you are smoking or grilling.

Marlin’s unique taste varies depending on the cooking method and seasoning. You can either grill, bake, smoke or pan fry as you do salmon.

Here is a marlin fish recipe.

Is It Safe To Eat Marlin?

Marlin is a great delicacy with many health benefits, but you should consume it in moderation due to high mercury and other toxins.

Whether it’s eaten raw or cooked, ensure it’s correctly cleaned and processed to minimize the risk of getting foodborne diseases.

What Are The Different Types of Marlin

Can You Eat Sea Urchins and How Does It Taste?

The Effects of Climate Change on Sharks

What Are The Different Types of Whale Species