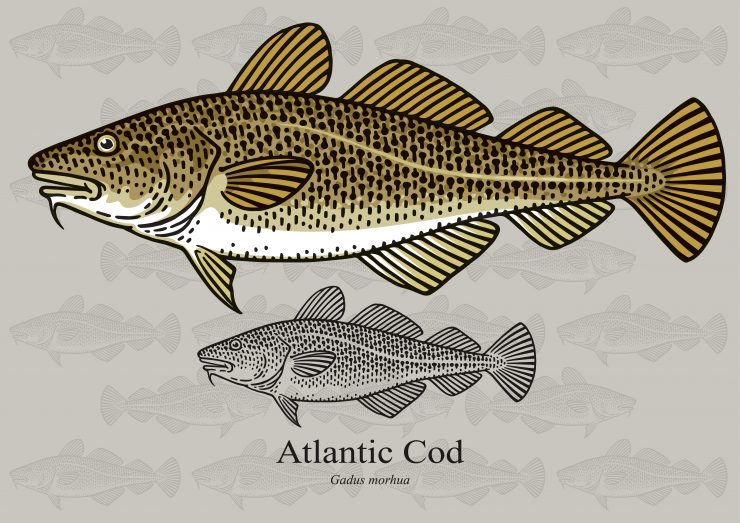 Atlantic Cod can be found in the North Atlantic Ocean from England to Cape Hatteras, North Carolina. Cod is most common in US waters on Georges Bank and in the western Gulf of Maine.

Cod is an emblematic New England fish, yet Atlantic cod stocks in our region have plummeted in recent years. Conservationists are striving to repopulate this area.

Although Atlantic cod spend the majority of their time on or near the seafloor, they are occasionally seen foraging higher up in the water column.

They consume a wide range of prey, including bony fish, American lobsters, and other invertebrates.

Adult Atlantic cod are only eaten by huge sharks, while juveniles are eaten by a range of medium-sized predators, and cannibalistic adults are known to devour them.

Female Atlantic cod release eggs and males release sperm into the water column above the seafloor at the same time, a phenomenon known as broadcast spawning.

This strategy increases the chances of successfully fertilizing eggs and preventing fertilized eggs from being devoured by egg predators near the seafloor.

Researchers believe that dominant males get exclusive (or nearly exclusive) rights to spawn with available females despite the fact that they form vast reproductive groupings.

The Atlantic cod is one of the most prolific bony fish species, with females capable of releasing hundreds of millions of eggs over the course of their lives.

Only a small percentage of these children grow up to be adults.