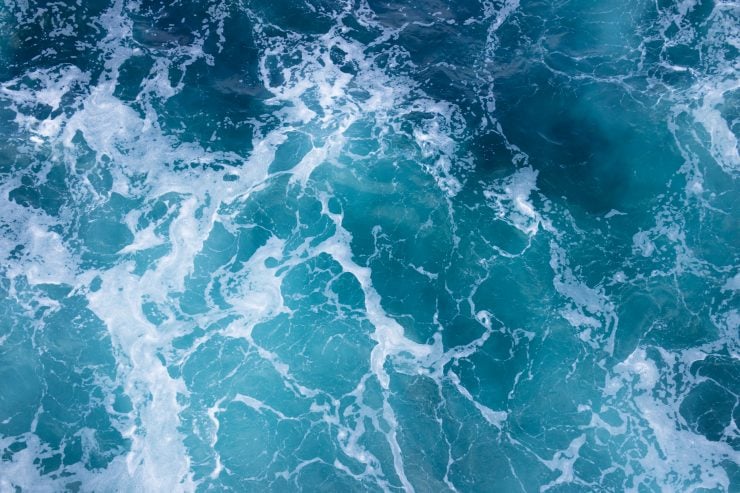 It’s an age-old question that many folks have asked: why on Earth is the ocean blue?

The ocean is blue because water absorbs color from the red part of the light spectrum, acting as a filter, and leaving behind colors in the blue spectrum. There are other factors that also make the ocean look blue–namely, that the sea reflects the color of the sky. The blue color that we know of the ocean is not about the color of the sky, but about light.

Light and the Ocean

Water is clear, and as a result, colorless on its own. So, why is the ocean blue? NASA — The National Aeronautics and Space Administration — tells us that it is light that causes the blue color we see. They explain that light that is absorbed and scattered in certain wavelengths and frequencies causes the human eye to perceive the color blue.

To understand how light is scattered and absorbed, we first need to talk about light in and of itself. The ocean absorbs nearly all of the sunlight that hits it every day and very little light, if at all, is reflected back from the surface of the water.

However, red, orange, and yellow light waves are longer, ranging from the low end of 550 nanometers for green up to 700 nanometers for red. Light waves on the red end of the spectrum, being longer and at a lower frequency, do not get scattered, and are absorbed quickly by the ocean.

As a result, these light waves get absorbed much more easily, so what is left reflecting to the human eye is what we perceive as the color blue.

The light that does penetrate the water then interacts with water molecules. In addition to these molecules, we can also see that silt, sand, plants, and marine life are among the foreign bodies that impact the scattering of light. The color of the water is always dependent on the objects interfering with the scattering of color wavelengths.

Countless types of particles suspended in the water can impact its perceived color. The most common particles known to interfere with water color are phytoplankton and chlorophyll — the presence of these particles increase the extent to which light is scattered. These green-colored lifeforms can even absorb certain wavelengths of light more thoroughly, thus changing the perceived color of the water.

Chlorophyll, which is green, is the most essential light-absorbing substance in the ocean. Phytoplankton use chlorophyll to photosynthesize, the process by which plants create food from carbon dioxide and water.

Phytoplankton consist of minuscule, single-celled, green-pigmented plants. Because of their green color, the chlorophyll and phytoplankton end up absorbing both red and blue wavelengths, so the naked eye perceives the reflection of green light.

Although phytoplankton are no larger than the head of a pin, the right amount of sunlight and chlorophyll can result in a bloom that is so massive that it can change the color of the ocean.

Different species of phytoplankton blooming in particular areas can also cause the difference in the blue and blue-green colors of the ocean.

For example, the waters of the Malvinas Current, at the very bottom of the globe near Argentina, are rich in a type of phytoplankton called a coccolithophorid. This phytoplankton’s properties cause light to be absorbed so that a beautiful turquoise color is reflected.

When the ocean looks dark and muddy after a storm, it is because sand and sediment have been churned up from the bottom of the sea by the storm’s wind and currents. Silt and sand from the rivers that feed into the ocean can also impact water color, making it look significantly darker and muddier.

On the other end of the spectrum, white sand without much phytoplankton, like in the Caribbean, will look very light blue or turquoise.

In very deep waters, light does not penetrate very far. Because of this, phytoplankton are unable to grow and impact the water color. Therefore, very deep waters outside of the Sunlight Zone of the ocean will always appear to be a very heavy blue or black.

The next time you are by the seaside, notice the color of the water. Is it just blue? Or is it some variegated, ever-changing, inexplicably beautiful kaleidoscope of blues, greens, and whites? If the ocean is blue — or any other color — you’ll know why.