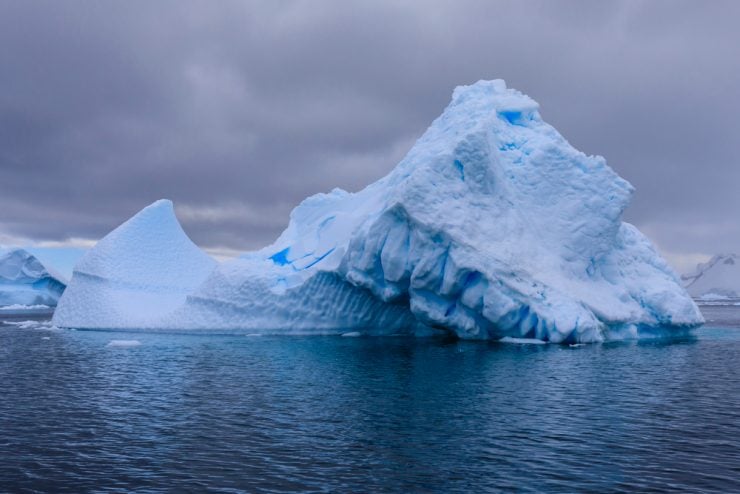 Everything You Need to Know About Icebergs

Icebergs are large pieces of freshwater ice broken off from a glacier or ice shelf that floats freely in open water.

What is an Iceberg?

An iceberg is a large chunk of ice that floats freely in open water. It’s a floating mass that calves from a glacier or an ice sheet. Icebergs are formed on land but break off and often head out to the open sea.

The thought of a giant icy mountain floating in the water is pretty remarkable and arouses interest in even the least adventurous people. But what is an iceberg? Why do we research them?

This article will discuss these questions, and more.

For a floating block of ice to be classified as an iceberg, it must measure 16 feet or more above sea level and more than 98 feet wide. The ice must also cover an area of over 5,382 feet. However, researchers categorize icebergs smaller than five meters as bergy bits and those smaller than one meter as growlers.

Most icebergs originate from the North Atlantic Ocean and Antarctica due to their freezing temperatures. From here, they slide into the ocean after calving. Calving occurs for many reasons. Sometimes strong ocean currents crash against a glacier, causing part of it to separate into an iceberg.

Other times, an increase in water and air temperatures can weaken the ice, causing cracks. Over time, these cracks can widen (if temperatures remain too high), causing chunks of the ice to break off, forming icebergs.

In 2000, an Arctic storm caused an ice sheet the size of Connecticut, and half a mile thick, to break off into icebergs. The ice sheet was situated in Antarctica, but parts of it have floated as far as New Zealand over the years.

Icebergs offer a range of benefits to both human and animal life. Such benefits include:

However, the primary importance of icebergs is likely in the data that they provide researchers regarding climate change. For example, the Greenland Ice Sheet is the second-largest ice mass on Earth.

Due to its size and uninhabitability, changes in this formation, and the rate at which these take place, can be tracked by scientists and measured against other factors, like increasing air temperatures.

Monitoring and Detection of Icebergs

The U.S. National Ice Center (NIC) collects and monitors data across the Northern and Southern Hemispheres. NIC uses this data in weather forecasting and oceanography research. Icebergs, therefore, are an integral element in climate change research, often acting as the benchmarks for researchers to gauge and rework carbon footprint policies across the world.

NIC is a tri-agency operational center under the NOAA, the U.S. Navy, and the U.S. Coast Guard sponsorship. Whereas the NIC uses satellites to monitor icebergs in the North Atlantic Ocean and Antarctica, the International Ice Patrol tracks icebergs with airplanes.

Most icebergs calve away from glaciers in Greenland. The size, shape, and availability of icebergs depend on temperature, ocean currents, wind, sea ice, and other factors. Icebergs may play an integral role in nature and are a sight to behold, but they can also be very dangerous.

Generally speaking, icebergs do more good than harm. As discussed above, icebergs offer scientists a wealth of data on the state of our planet. This being said, it is difficult to think about icebergs without your mind wandering to the infamous iceberg that sank the Titanic in 1912, and for good reason.

This event prompted the creation of the International Ice Patrol, which serves to warn ships about potential threats of iceberg collisions. Due to this event, shipping routes throughout the Atlantic Ocean are now closely monitored. This organization has protected countless ships and lives for decades.

Icebergs also pose some risks for marine life. As we have established, icebergs are colossal entities. Sometimes, their size can adversely affect surrounding marine life – animals like penguins can struggle to reach their food in the open waters due to them.

Additionally, large icebergs can take up too much space in the water surrounding them, thus blocking out the sunlight. This, in turn, decreases the number of phytoplankton, which is the foundation of the marine food chain.

What Color Are Icebergs?

Your first thought for this question may be white, or perhaps blue, if you are more clued-up on the topic. You would be correct, but this is not the full picture. Icebergs come in a myriad of hues, depending on various factors.

Extensive snow coverage results in an iceberg’s traditional white color, but mineral particles freezing on icebergs can result in a yellow hue.

Icebergs can even appear black – but this is usually due to volcanic ash accumulating on top.

Other interesting color options include stripes, as a result of ice melting and then refreezing, or even green, which is often the result of the iceberg’s natural blue hue mixing with yellow matter.

Why Do Icebergs Float?

An iceberg can reach a height of 300 feet above the sea surface and can have a mass of up to 10 million tonnes. Despite their size and weight, icebergs float on water because they have a lower density than the surrounding water.

In fact, the visible part of icebergs that we see comprises only 10% of the total iceberg.

How Far Can Icebergs Float?

Icebergs can float on water for up to six years. They can go as far as to the sea that sits just outside New York City before they melt and disappear. The infamous iceberg that the Titanic crashed into had floated from Greenland.

Icebergs can drift south from Greenland to as far as Ireland or Bermuda.

How Fast Can Icebergs Move?

Icebergs move at an inconsistent speed. The inconsistency is due to various factors, including size and shape, sea ice, wind, currents, and waves. As the sea ice breaks up, ocean currents and wind batter icebergs from all sides, reducing them in size and moving them to new locations.

How Many Icebergs Are There Floating Around?

You may be surprised to know that roughly 40,000 icebergs calve from the Greenland glaciers every year. What is more, almost 500 of these enter the Atlantic Ocean’s shipping lanes per year. This may sound like a small fraction of the total number of icebergs, but keep in mind the size of icebergs, as we established earlier.

How Old is the Average Iceberg?

As you may imagine, icebergs can have quite an extensive lifespan. However, this can, and has, been negatively affected by climate issues like global warming.

The average lifespan of an iceberg is roughly 3,000 years. This being said, this estimate is primarily for the icebergs that do not stray too far from home. Scientists have noted that when icebergs stray, especially into warmer water, their lifespans can be reduced dramatically.

As a result, rising sea temperatures have to be closely monitored and prevented if possible. The main concern is not the premature demise of the iceberg, per se, but rather the risk of rising sea levels that accompanies the melting of these mammoth entities.