What Is the Deadliest Jellyfish?

But what makes this creature so deadly? How can you avoid it? And what do you do if you happen to get stung by a box jellyfish?

What Makes the Box Jellyfish So Deadly?

The box jellyfish is known as the deadliest jellyfish because it is arguably the most venomous animal in the world.

There are many different types of jellyfish that belong to the box jellyfish family. In fact, there are over 50 species of box jellyfish, though some are more deadly than others.

Some of them – such as the Irukandji jellyfish, which measures just .2 inches in length – release toxins that are 100 times stronger than the bite of a cobra.

Additionally, the Sea Wasp jellyfish – also a part of the box jellyfish family and thought to be the most deadly jellyfish on the planet – has the ability to kill up to 60 people with one dart.

As there are half a million of these microscopic darts on each of these creatures’ tentacles, being brushed by a tentacle will certainly cause for a less than enjoyable experience.

What Happens If You Get Stung?

If stung by the deadliest jellyfish, you will most certainly know right away. In fact, many people go into shock by the pain of the sting before any of the actually deadly symptoms take over.

If you don’t go into shock, there are a a number of symptoms that could occur. If you are lucky, less lethal symptoms include welts and blisters forming on the stung area within minutes, severe pain, and feeling faint.

However, if the length of the welts is over 700mm, it is likely that death will be upon the victim between 5 and 20 minutes after being stung.

The Irukandji box jellyfish actually has its own syndrome, known as Irukandji syndrome. The jellyfish sting seems like a mosquito bite at first, but after some time (usually between 5 and 45 minutes) symptoms begin to appear.

These symptoms include severe back and headaches, shooting pains in the body, vomiting, and difficulty breathing.

It is important to note that not all box jellyfish encounters are deadly. However, approximately 100 people die each year from stings by the deadliest jellyfish.

If Stung, Here’s What to Do

If you yourself get stung by a box jellyfish, you will really not be able to do too much to help yourself due to the amount of pain you will be in. 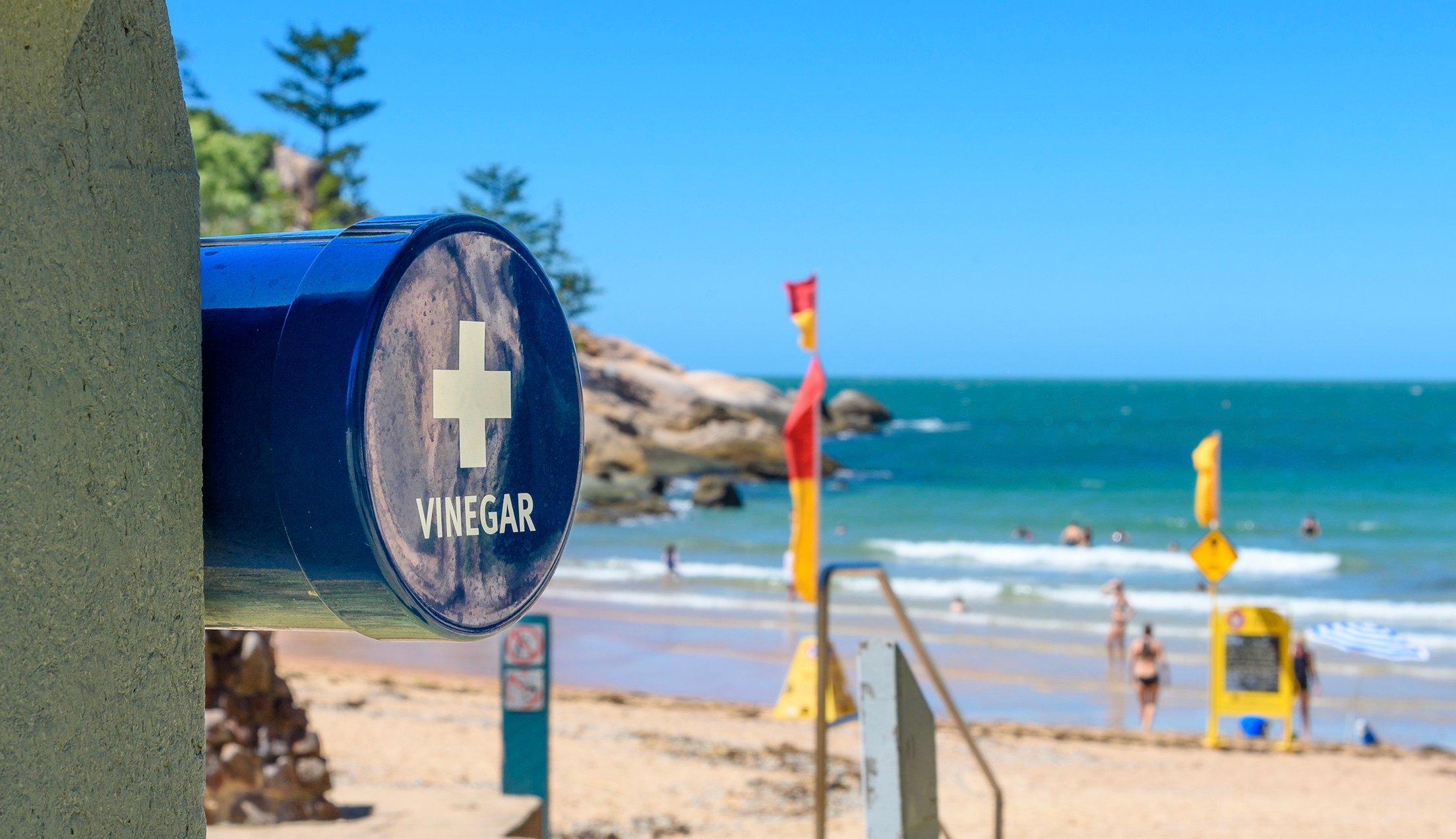 Simply call on people around you to help you out of the water and seek medical attention. Otherwise, focus on relaxing until you can get professional help.

For those who ever encounter a person who has been stung by a box jellyfish, there are some steps you can take to help!

First, make sure the stung person is removed from the water. If you can see any stingers, remove them with your fingertips (as the skin is thicker and should not be penetrated) or tweezers if you have them.

While you are completing these steps, make sure that somebody calls for medical attention. If you can, get a lifeguard to help keep the person stable, especially if CPR is needed.

How To Avoid Box Jellyfish Stings

Box jellyfish enjoy tropical and subtropical waters. They have been found in the Philippines, Australia, South Africa, Japan, Florida, Hawaii, and even California! 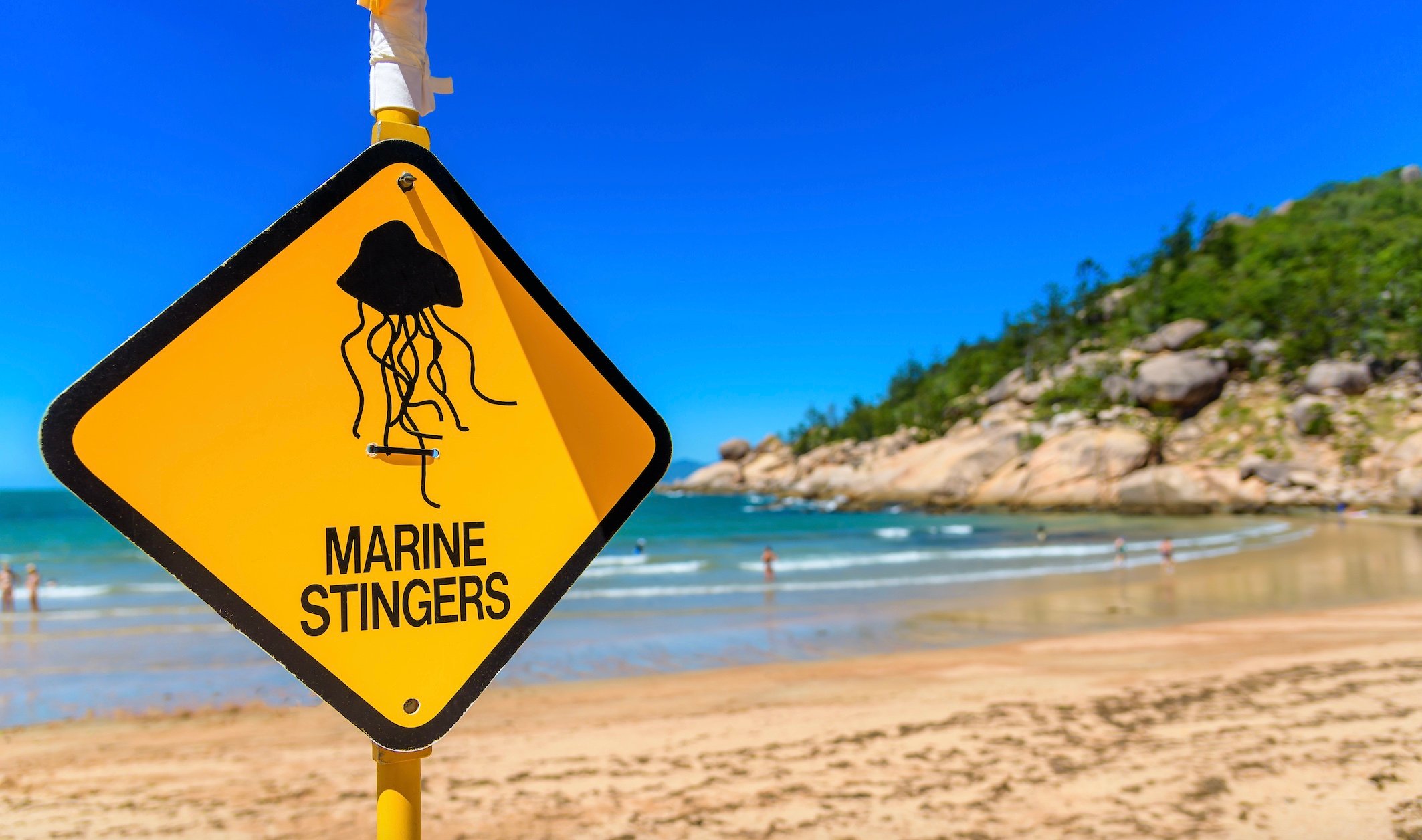 So if you are taking a vacation to any of these places, make sure you look up if there have been any jellyfish in the area.

Box jellyfish are often clear, sometimes too small to see, and can have tentacles that reach up to 10 feet!

Because of this, avoiding box jellyfish stings by looking for them is not incredibly effective. Instead, do your research on when and where most stings take place!

One way to greatly reduce your chances of getting stung is to wear clothes: anything from pantyhose to a wetsuit can help prevent a very unfortunate and painful situation.

While they are difficult to avoid, it is best to know the symptoms of a box jellyfish sting in case you or someone around you ever has an unfortunate encounter with the creature.

What’s the Difference Between the Ocean and the Sea?

What Is A Storm Surge?

What’s the Difference Between a Dolphin and Shark?

The Great Barrier Reef: What You Need To Know