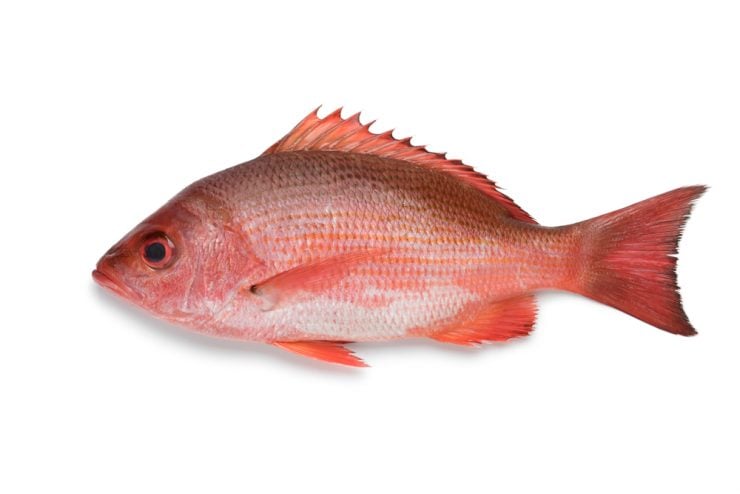 Northern red snappers live in the Americas and play an important role in the ecosystem. In this guide, we’ll introduce you to the habitat and behaviors of the northern red snapper, as well as fishing regulations in place to prevent it from becoming extinct.

As a member of the snapper family, the northern red snapper has a sloped face and tail. It has a sharp dorsal fin and average size scales.

A northern red snapper’s teeth are narrow and pointy, although it doesn’t have distinct canine teeth in its upper jaw like certain other snapper species.

The typical northern red snapper grows up to two feet long, although they can grow as much as 39 inches.

Their weight corresponds with their length, and the largest known northern red snapper clocked in at 50 pounds, 4 ounces. However, most adult red snappers weigh half this amount.

Northern red snappers look red from afar. Up close, one can see that they have flecks of white mixed in with the red, along with a usually whiter underside, which gives them an almost pink-like hue.

Their deepest red color occurs on their backs. Young snappers often have a dark circle on their sides, but this goes away as the snapper gets older.

Northern red snappers reach sexual maturity between two to five years of age. They spawn multiple times during the year, from May to October, releasing eggs and sperm into the water column.

Larger and older northern red snappers release more eggs than younger adults. They prefer to spawn where there’s a lot of activity in the water, such as in estuaries and harbors.

The eggs float on the water’s surface, and within three days, baby snappers hatch into larvae. They remain in this larva phase for four weeks, growing from two to twelve millimeters.

After a month, northern red snappers pass into the juvenile settlement phase, where they remain in shallow waters. As summer changes to autumn, the young snappers become coastal juveniles. At that point, they’re around 60 millimeters long and living in more complex coastal habitats.

The age at which the juvenile snapper transitions into adulthood varies. However, by five years old, all snappers are adults, and they can live over fifty years.

Northern red snappers thrive in water ranging from 30 to 200 feet. However, they sometimes wander down as deep as 300 feet.

As bottom-dwelling fish, they love rocky environments and places where they can hide, such as artificial reefs and shipwrecks. They also congregate around ridges and ledges.

Northern red snappers are a social species. Therefore, you can often spot them in large schools. However, these snappers prefer to school with fish of the same size, so it isn’t likely that you’ll see a young northern red snapper schooling with a full-size snapper.

The schooling patterns of the northern red snapper matter in regard to its habitat because it changes its schooling location according to its age. The following four-step process allows snappers to feast on the appropriate type of food for their size:

Over one-year-old snapper: These adult fish move to high-relief zones where they remain for the rest of their lives. They prefer deeper waters where artificial reefs are, such as shipwrecks and oil platforms.

Although northern red snappers are social fish, they don’t get along well with different sized fish within their species. For this reason, you’ll rarely see a large snapper sharing the shallow habitat of a young snapper.

Where Does the Northern Red Snapper Live?

Northern red snappers live primarily in the southeastern Atlantic Ocean, Gulf of Mexico, and the Caribbean Sea. In some cases, you can spot them as far north as Massachusetts, but they typically prefer warmer water.

Depending on the country you’re in, you may hear people calling the northern red snapper other names such as “Pargo” and “Mero.”

Although northern red snappers live in reef-like areas, they obtain most of their food from the ocean floor. They are intelligent predators and use ambush as their way of capturing prey.

What Does the Northern Red Snapper Eat?

Between natural predators and human destruction, the northern red snapper is at risk of a declining population. Below are some of the biggest concerns facing this fish.

Unfortunately, humans are one of the biggest threats to the northern red snapper. Many snappers don’t make it to adulthood because the habitat where juveniles live is a prime fishing area for commercial and recreational fisheries.

Shrimping is especially damaging to juvenile northern red snappers because of the bottom trawlers they use. These young fish become caught up in the nets and, as a result, end up sacrificing their lives.

Global warming is already having an impact on northern red snapper. Although snappers prefer relatively warm water, the increase in seawater temperature is killing the coral reefs where they live. As a result, they have less food and shelter.

Furthermore, climate change offsets the marine ecosystem, and scientists recognize that certain species will adapt better than others. As a result, certain fish will face extinction while others face overpopulation.

Adult northern red snappers enjoy a status towards the top of the food chain, although they aren’t immune to predators. Sharks, marine mammals, and larger fish are their most common predators.

If a snapper quickly emerges to the water’s surface after living dozens of feet at depth, the difference in water pressure creates gas in the bladder and pushes the snapper’s stomach up through its mouth. The situation is common during fishing.

Many recreational fishers believe that the snapper will die when they see this scenario and choose to keep the fish even though legally, the snapper isn’t the correct size or it isn’t in season. Alternatively, the fisher sometimes pokes the snapper’s stomach with a knife before they release it, thinking that they’re helping. Such interference will kill the fish.

The northern red snapper isn’t an endangered species, thanks to governmental regulations. Given that these snappers are among the most valuable fish species in the Gulf of Mexico, laws help maintain a balance between bringing these fish to people’s dinner plates while ensuring enough young snapper stay in the water to reproduce.

Within the United States, every state sets its own quota laws for capturing northern red snappers. Most states have a minimum length policy of 16 inches.

If you’d like some interesting tidbits to share about the northern red snapper at your next family gathering, we compiled some unique facts for you.

The northern red snapper serves as an important fish from an ecological and human standpoint. They help keep other fish species in check and provide an abundant source of food and income for people living by coastal waters.