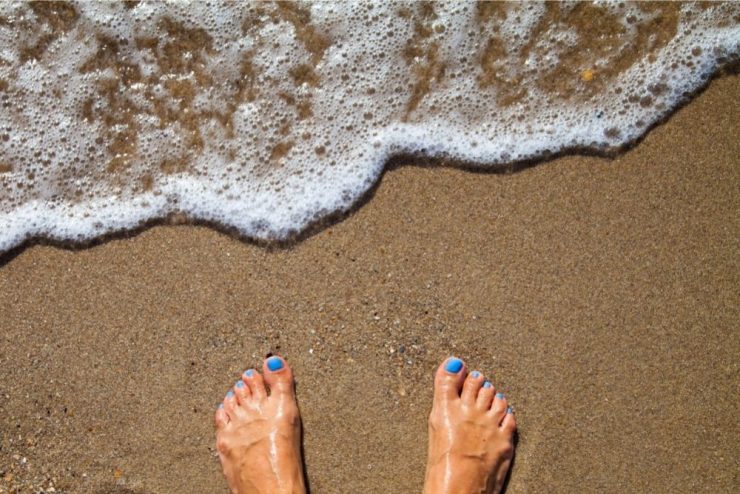 What Is Sea Foam?

Depending on where you are on the beach, you may notice some remaining foamy particles that cling to the sand as the waves smash against the shore or wash at the beach.

This frothy substance can even be lifted off the ground and blown around on particularly windy days. Well, this is known as sea foam.

Despite the greenish trendy color being called “seafoam green,” actual sea foam isn’t all that green. In fact, it’s not green at all.

It’s usually white, or an off-white shade. But it can sometimes be a reddish-brown, it all depends on what’s actually in the water.

Seawater contains dissolved salts, proteins, oils, dead algae, detergents, and other contaminants, and a variety of other organic and inorganic materials.

When the waves and currents sir all of this up, small bubbles will form on the surface. Lots of tiny bubbles clustered together along the edge of the tide is sea foam.

So, seafoam is a mechanical and chemical phenomenon caused by two key factors: large swells or storms and high concentrations of organic debris in seawater.

These aerosol particles are the result of bursting bubbles caused mostly by regular breaking and plunging waves.

When high quantities of decay develop in the waters, they typically wash up as a brown or reddish form of foam in the waves.

A lot of decomposing algae stuff washes up on the beach. As the wave churns up this biological debris, foam emerges.

It is sometimes referred to as the ‘Red Tide,’ and it is caused by the presence of waste materials produced by human activity.

Air, water, and a vital third ingredient known as a surfactant are required for foam to develop.

A surfactant is a type of sticky molecule that adheres to the surface of water and air. This chemical is man-made and is often derived from fertilizers, industrial waste, and even ocean sewage.

The majority of sea foam is not hazardous to humans and is frequently an indicator of a healthy ocean environment. However, when huge toxic algal blooms decompose along the shore, there is a risk to human health and the ecosystem.

Popping sea foam bubbles during blooms is one way algae poisons become airborne. The generated mist can irritate beachgoers’ eyes and entail a health concern to individuals suffering from asthma or other respiratory disorders.

Air, water, and a vital third element called a “surfactant”–a type of sticky molecule that clings to the surface between water and air–are required for foam to develop.

This surfactant element can come from a variety of sources, including fertilizers, detergents, paper mills, leather tanneries, and sewage.

Surfactants are derived from the proteins and lipids found in algae, seaweed, and other marine plant life.

There are many different compounds that can operate as surfactants, but they all have one thing in common: one end of the molecule is hydrophilic (attracted to water) and the other end is hydrophobic (repelled by water).

While seafoam is a natural byproduct of saltwater agitation interacting with organic material on the ocean’s surface, human activities can contribute to the formation of excessive and often harmful foam.

Compounds produced from petroleum production and transport, synthetic surfactants, and pesticide use, in addition to the organic oils, acids, and proteins that accumulate on the sea surface microlayer can end up contributing to sea foam.

While an intriguing phenomenon, foam on the sea is an indicator of deeper difficulties that may befall the population living near the seashore.

While natural foam-causing factors cannot be neutralized or eliminated in the best interests of these people and the birds that can be preserved, man-made foam-causing substances can very well be brought under control.

In parts of the world such as Australia, sea foam poses other risks in addition to toxicity. Sea snakes have a tendency to hide beneath the surface of the foam.

Sea snakes are highly venomous, however, they have small fangs and are generally not aggressive.

As well as snakes, the foamy surf can also contain pollution and viruses as stormwater from rivers and drains carries oil, detergents, and sewerage into the sea.

Can you Drown in Sea Foam?

While regular white sea foam isn’t toxic, that doesn’t mean it’s safe. When the weather becomes totally out of control, the churning of the water produces a large amount of sea foam.

Quite a bit. A king tide with 25-foot (almost 8-meter) waves generated a “blender effect” in Washington state in the winter of 2020, churning up sea foam 3 feet high!

While it’s pretty rare, it’s entirely possible to drown in sea foam. For example, back in 2020, five people died in the Netherlands after getting trapped under a huge layer of sea foam while surfing.

Witnesses told how they vanished under a “man-sized” “ layer of sea foam on the surface of the water. It was reported to be so thick it was very difficult for surfers to get back on their boards to return to shore if they fell off.

Spring tides are thought to have churned up the foam, which rescue helicopters attempted to blow away in their desperate search for the stranded surfers.

It can also endanger wildlife. An investigation into the mysterious deaths of seabirds along the west coast of the United States, for example, discovered that foam from a rotting algal bloom had stripped the waterproofing from their feathers, making it difficult for the birds to fly and causing hypothermia.

What’s the Difference Between a Seal & a Sea Lion?

What is Tectonic Shift?

What Is A Storm Surge?

Quick Facts: Bioluminescence & What Causes It

What’s the Difference Between River Otters and Sea Otters?

Why is the Ocean Salty?