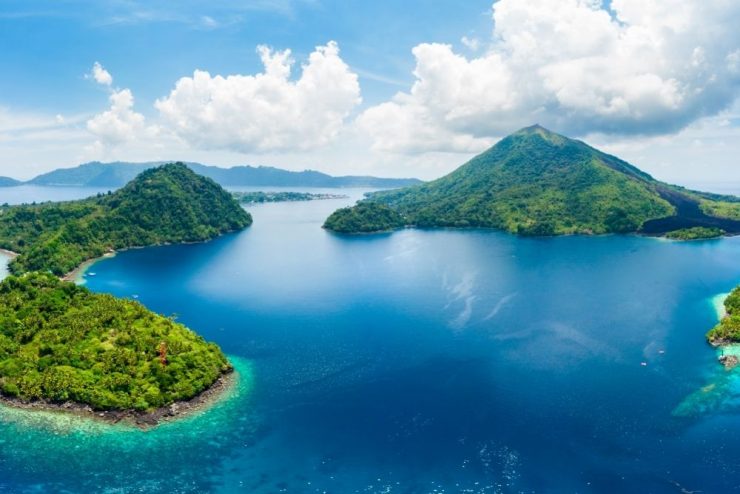 The ocean is a beautiful, interesting and unique ecosystem. Here at American Oceans, we strive to educate and inform our readers about marine life, and everything there is to know about the ocean.

The sea is home to a range of species, life forms and rock formations. We want to find out and tell others everything we can about the ocean, before climate change makes it too late to do so!

With this in mind, have you ever heard of the term archipelago? We can bet that you’ve not come across the name, but you know what it is!

What is an archipelago?

In the shortest terms, an archipelago is the term for a chain of islands or a group of islands that are scattered in a location between rivers, lakes or the ocean.

The term itself comes from the medieval Italian word archi, which means principal or chief, and the Greek word pelagus, which actually means gulf, or pool.

As such, these groups of islands are broken apart by bodies of water such as natural pools, rivers or the ocean.

For the most part, archipelagos are created when a volcano erupts from the sea floor, which results in land forming above the water, called an oceanic island.

As volcanoes under the water erupt over a period of time, or if a group of volcanoes erupt, a group of islands will begin to form, which is what we call an archipelago.

This is why many island arcs have been formed in a single ‘hot spot’ area, where the volcanoes have erupted on the ocean floor. When this happens, the Earth’s crust shifts and moves, creating a line of islands and masses in the direction of the movement.

This is actually exactly how the islands of Hawaii were formed, as a string of volcanoes erupted, providing an upwelling plume of magma, that created new islands as the Pacific tectonic Plate moved.

Today, the Hawaiian Islands are still forming in this method, with the hot spot staying stable, as the Pacific plate moves in the northwest direction.

Even now, the Big Island of Hawaii is being formed by active volcanoes, creating seamounts off the coast of the island, breaking through the ocean’s surface, and becoming new, young islands.

In addition, archipelagos can also begin to form due to rising sea levels, erosion, the buildup of sediments and other natural processes.

Whilst archipelagos can be geologically related to other land masses, they are often defined by man-made borders, rather than their actual geological roots.

Where is the largest archipelago located?

To help you understand and define what an archipelago is, let’s find out what the largest archipelago is and where it is located.

The largest archipelago is located just off the coast of Norway in Northern Europe, and is aptly named the Norwegian Archipelago.

The Norwegian Archipelago is the largest archipelago in the world by a mile, as it consists of around 240,000 islands, cays, islets and coral reefs. In this vast archipelago, you can also find the Svalbard archipelago.

This archipelago, or island chain is found somewhere at the midway point between where the North Pole is and where Norway is, in the Arctic Ocean.

In the Northern Archipelago, the majority of the islands are nature reserves or national parks, with 60% of the areas being protected places for wildlife to thrive, such as the Arctic Fox, Polar Bear, and reindeer.

Another very large archipelago is the Malay Archipelago, which is found between the Indian Ocean and the Pacific. This archipelago has more than 25,000 islands across Southeast Asia.

This includes Malaysia and Indonesia, along with various other formations. It is thought that some of these scattered islands were once part of mainland Asia, and that they drifted and retreated during the ice age!

What is the smallest archipelago in the world?

There are many archipelagos in the world. For instance, places such as Japan and New Zealand are also considered archipelagos, as they have offshore islands scattered in their nearby waters and oceans.

Most of these will be within close range and proximity to the main island. For example, New Zealand is often considered the smallest archipelago in the world, as it is an archipelago with around 700 offshore islands!

While this sounds like a lot of islands, it is nothing in comparison to the Malay Archipelago.

What is the longest island chain in the world?

As previously mentioned, the islands of Hawaii are actually an archipelago. These islands are the furthest away from any landmass in the entire world!

What is the difference between an island and an archipelago?

The main difference between an island and an archipelago is that an island is a small stretch of land that is surrounded by water on all sides.

On the other hand, you have an archipelago, which is the term for a group or groups of islands.

How Many Oceans Are There?

How Many Hawksbill Turtles Are Left?