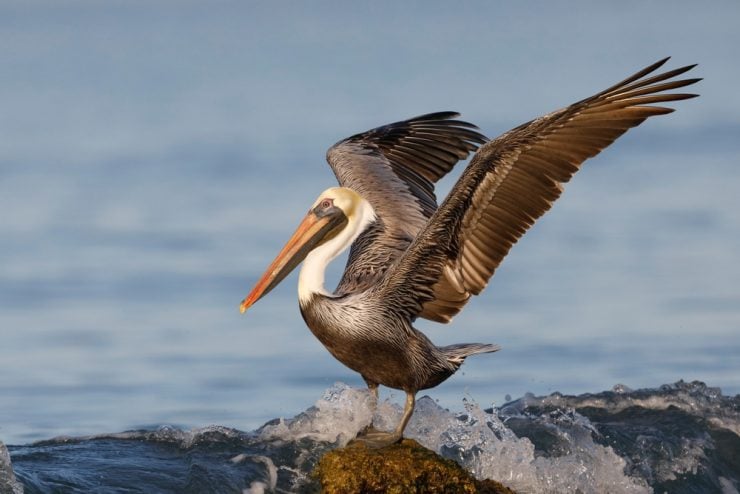 Brown pelicans are a commonly found coastal species throughout the Atlantic and Pacific coastlines.

While they’re more often observed today, that hasn’t always been the case.

In fact, for the longest time, there were major concerns about the long-term status and survival of the species.

Looking ahead, though, what is the status of these brown birds now as compared to what it once was? Are brown pelicans endangered?

Good news! The brown pelican is no longer an endangered species as of 2009, when it was removed from the United States’ Endangered Species Act, a spot it had previously occupied since the act’s inception in 1970.

Brown pelicans were originally removed from the Fish and Wildlife Service’s list of endangered species list as early as 1985, attesting to the brown pelican’s rapid recovery over the second half of the 20th century.

Since then, however, the brown pelican species has witnessed a remarkable turnaround, resulting in the highest number of brown pelicans worldwide ever recorded.

The estimated number of brown pelicans in the world is approximately 650,000 according to the US Department of the Interior.

What is Behind the Brown Pelican Resurgence?

The brown pelican saw its steepest decline between the 1940s and 1960s, mostly as a result of the pesticide DDT during pelican hunting, which adversely affected the species’ ability to reproduce.

A US federal ban on the DDT substance was enacted in 1972, which has been immensely helpful in facilitating the resurgence of the brown pelican.

The Gulf and Pacific coast states have also taken diligent measures to protect and restore the species, especially after the major Gulf of Mexico BP Oil Spill off the coast of Louisiana in 2010.

Remarkably, the brown pelican species has also recovered from that oil spill.

Louisiana, known as the “Pelican State”, joined forces with the Florida Game and Freshwater Fish Commission shortly after the oil spill to launch extensive conservation efforts.

Some of the Southwestern states have also made significant overtures to preserve the brown pelican, such as in Texas, where nature officials have purchased nesting sites and developed monitoring systems.

Though the species is no longer under the jurisdiction of the Endangered Species Act, the assistance it has received and continues to receive is as strong as ever.

Overall, the current and future outlook on the status of the brown pelican looks very promising.

Large-scale conservation efforts over the last several decades have been critical to the brown pelican’s survival and increase in population.

It also helped that the US government banned the use of DDT around brown pelicans in 1972, which reduced the number of hunters pursuing them and the amount of harmful toxins the species was exposed to.

In the words of then-Secretary of the United States Interior Ken Salazar in 2009, ”The Brown Pelican is back!”